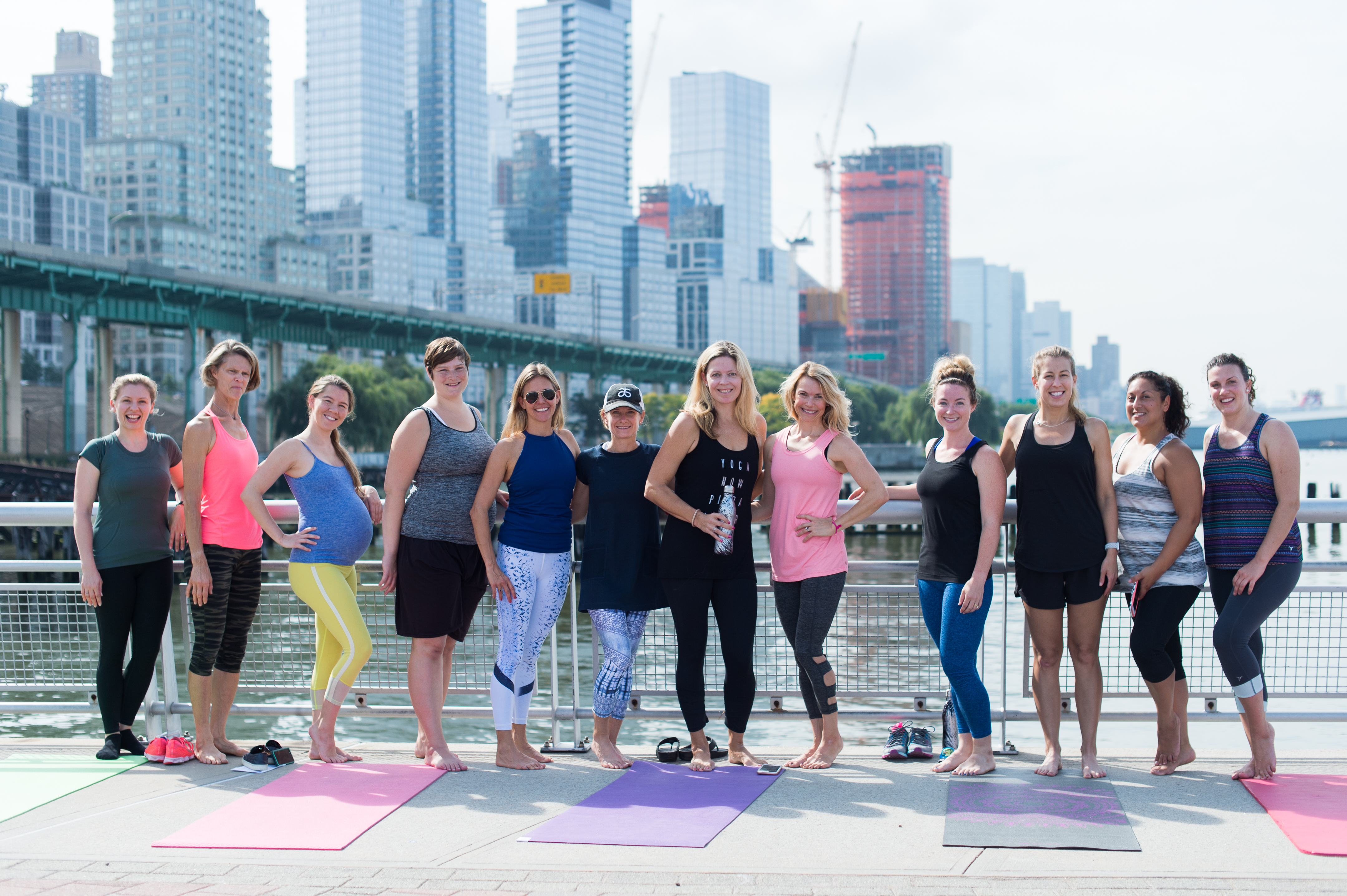 “Bravery is not the absence of fear. Bravery is feeling the fear, the doubt, the insecurity and deciding that something else is more important.” -unknown

So grateful for all the inspiring women who attended and supported last week’s Sweat for Smiles “Warriors for Warriors” Yoga Party, made possible by Gaiam. This outdoor yoga party was held on the Hudson in NYC and benefitted the Give Back Yoga Foundation, which supports our brave, heroic veterans with mindful yoga therapy. 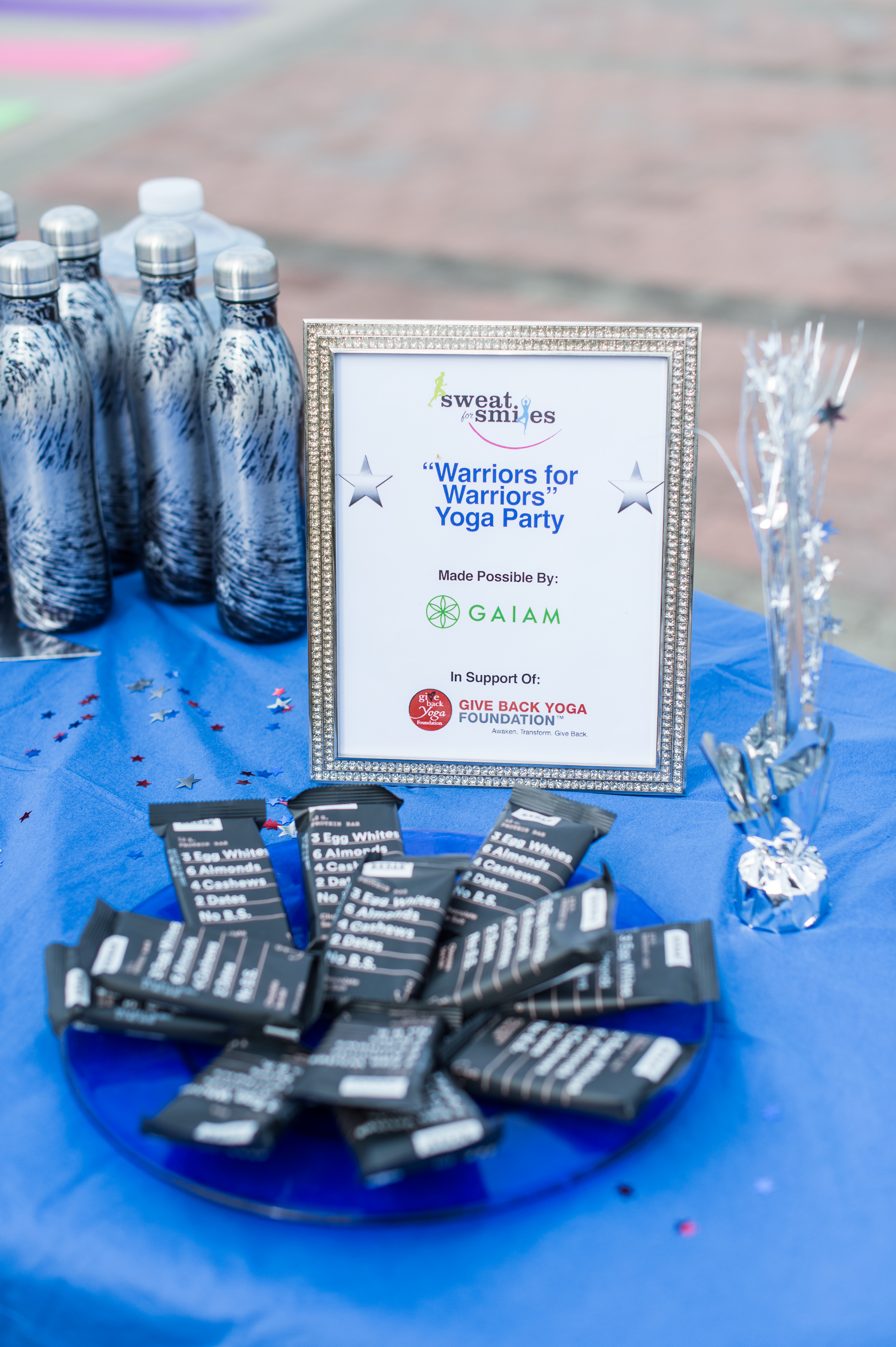 Upon arrival, Sweat for Smilers were given a Gaiam Water Bottle (in Swirl and Wave patterns), as a thank you for their support, and invited to fill it up with Arbonne’s Phytosport Complete Hydration. Phytosport Complete Hydration is formulated to help replace fluids and electrolytes lost during activity and contains flavorful ingredients including turmeric, ginseng and cayenne.

Phytosport Complete Hydration is formulated to help replace fluids and electrolytes lost during activity and includes turmeric, ginseng and cayenne. YUM! Olympic athletes drink Phytosport because its so effective and clean. 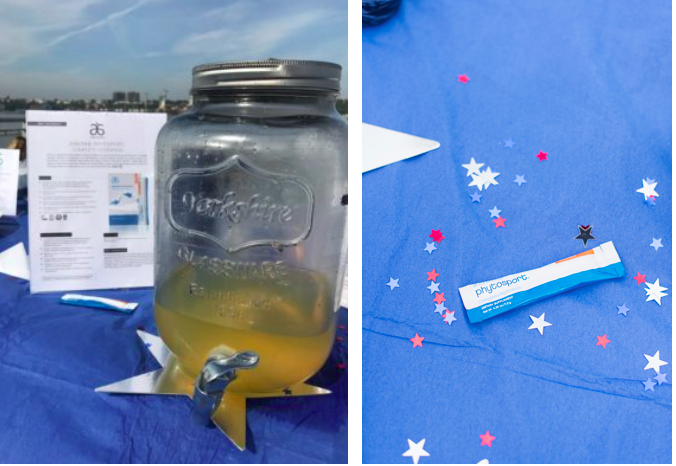 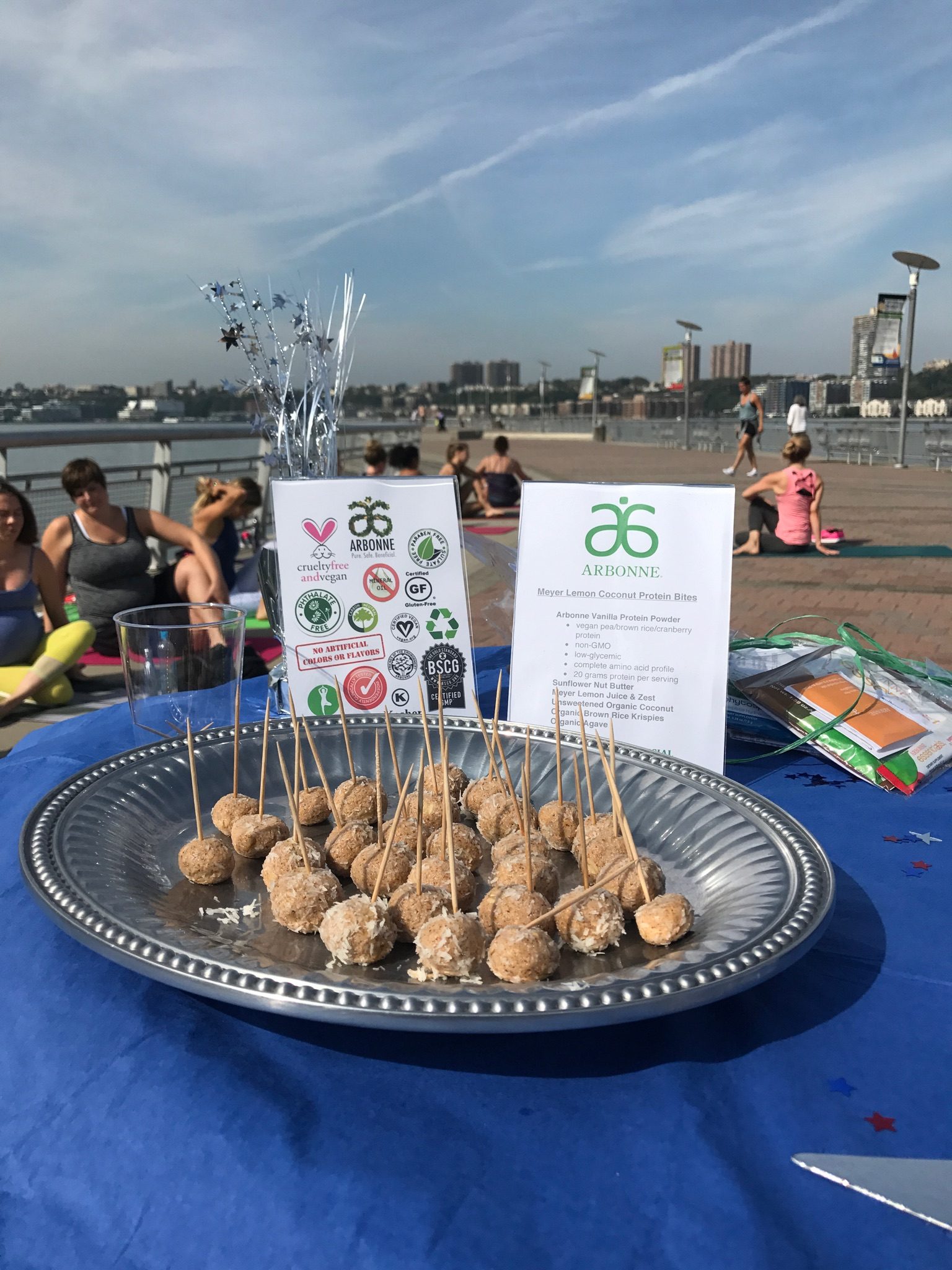 Celebrity yoga and pilates instructor, Kristin McGee led everyone through an invigorating 45 minute Warriors for Warriors Yoga Workout. From beginner yogis to advanced, everyone felt happy and recharged post-workout. 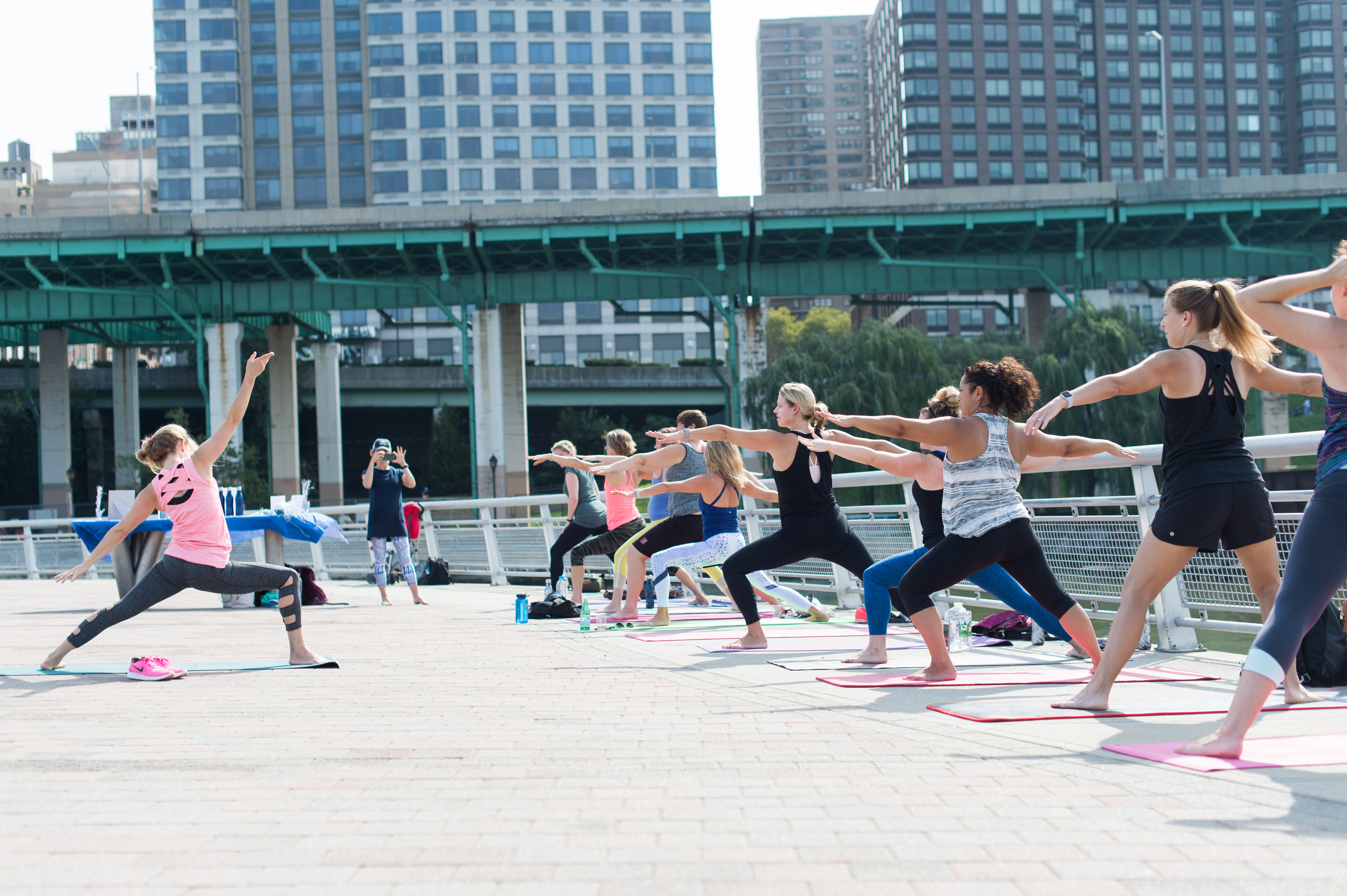 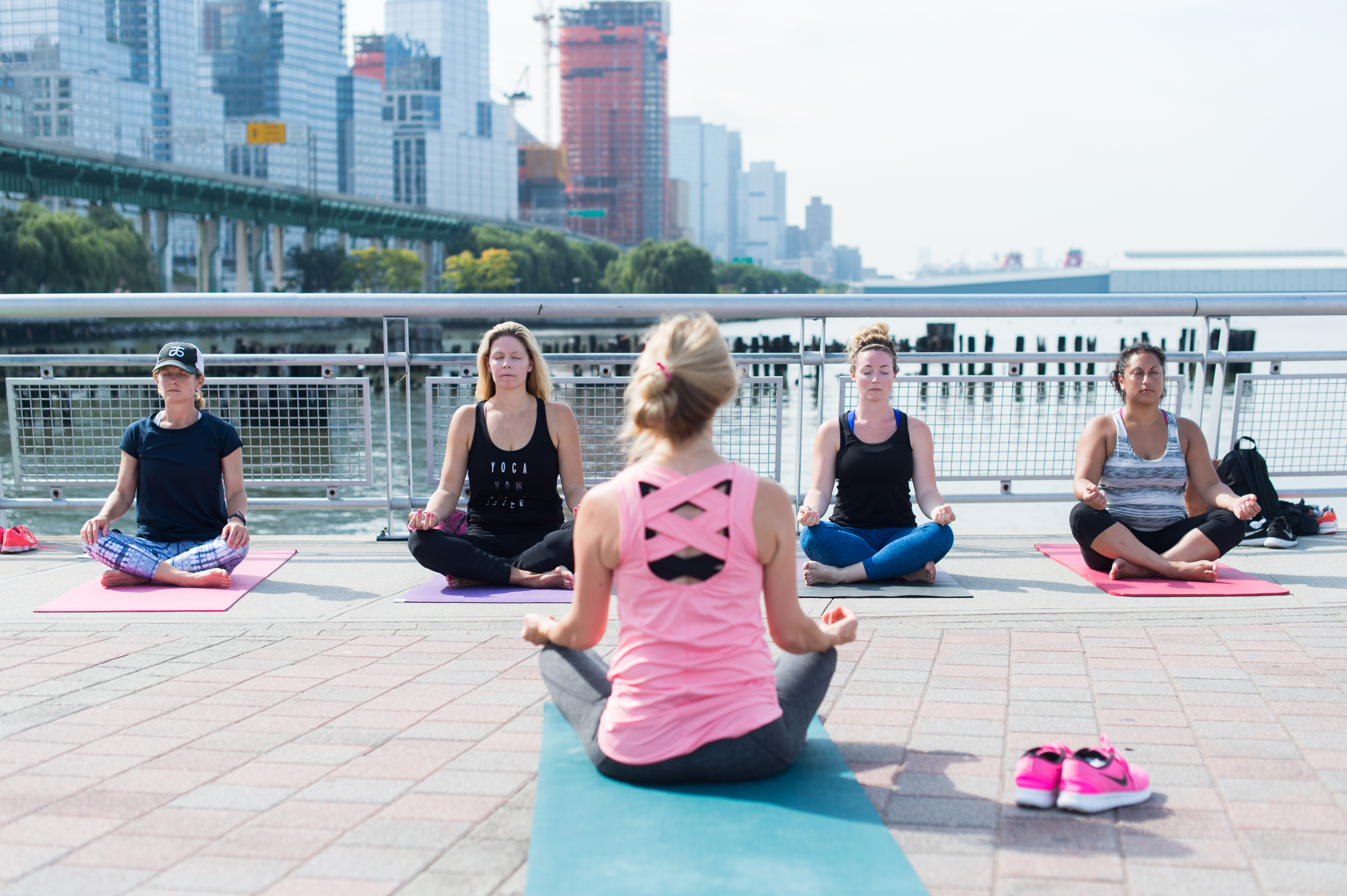 Kristin and I were thrilled to be wearing Gaiam fitness apparel and practicing on Gaiam Power Grip Yoga Mats at the party. The workout gear is stylish, flattering, and made of high quality material that is soft to the touch but easy to move around in, even when doing the most bendy yoga poses. The Power Grip mats are made of 100% natural rubber and have an amazing fabric-like texture that gives you a superior grip, ideal for mastering the toughest of poses! 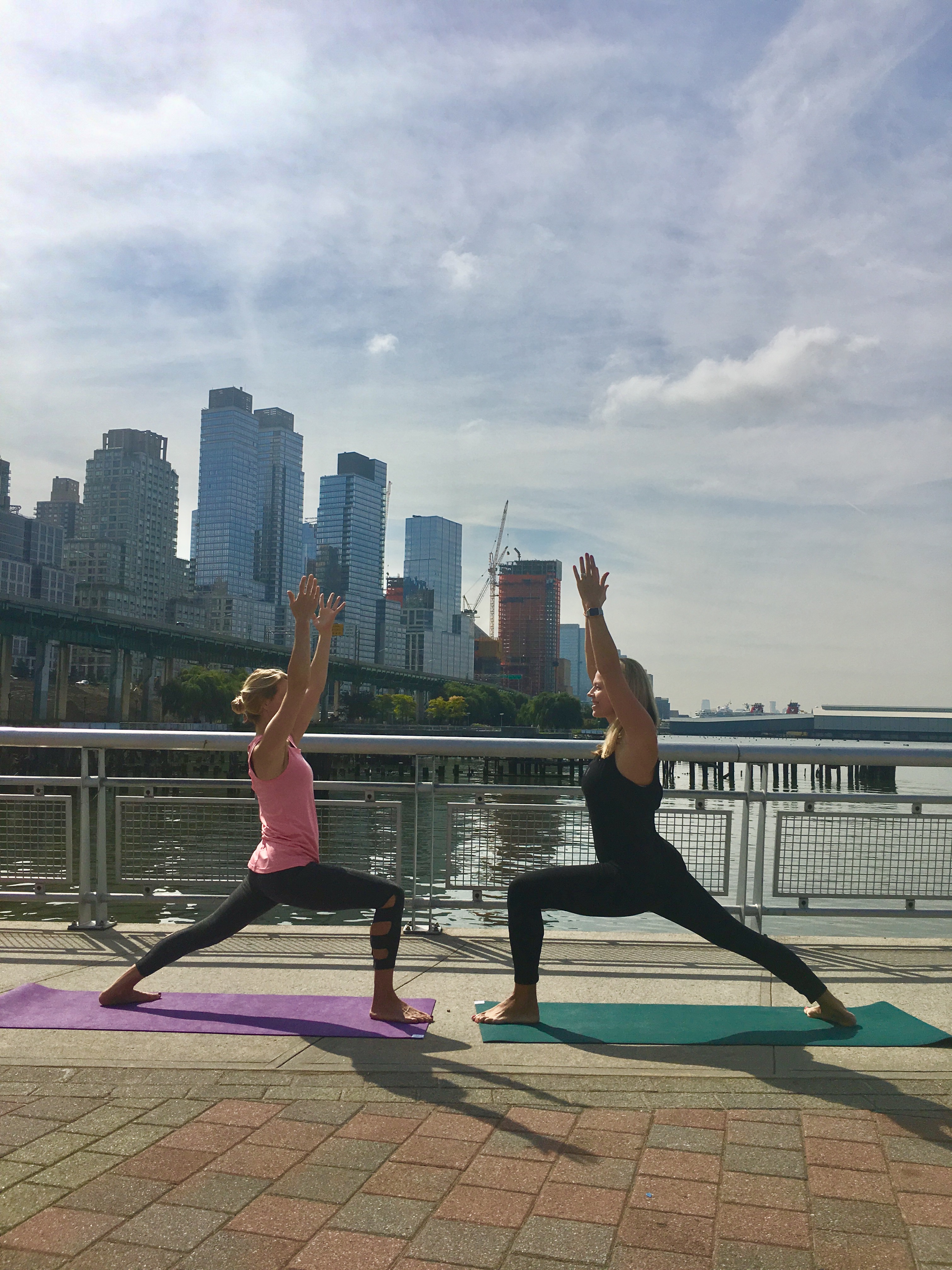 Gaiam, in Ancient Greek means, roughly, “I am the Earth”. Its Gaiam’s philosophy that “by nurturing, protecting and respecting the Earth and everyone and everything that exists here, we enrich our own lives and those of future generations.”  It’s a pleasure to team up with Gaiam in efforts to protect and respect our veterans by supporting the Give Back Yoga Foundation.

More About Give Back Yoga Foundation from GiveBackYoga.org:

“Out of over 2mm Americans serving our country in Iraq and Afghanistan, 1 in 3 is coping with PTSD, traumatic brain injury, or another stress related disorder.  Give Back Yoga is committed to supporting these warriors and their families through Mindful Yoga Therapy, a program designed to help vets find a calm and steady body and mind through the practice of yoga and meditation, giving warriors — a “toolbox” — that can help them transition into a life of strength and resilience.” 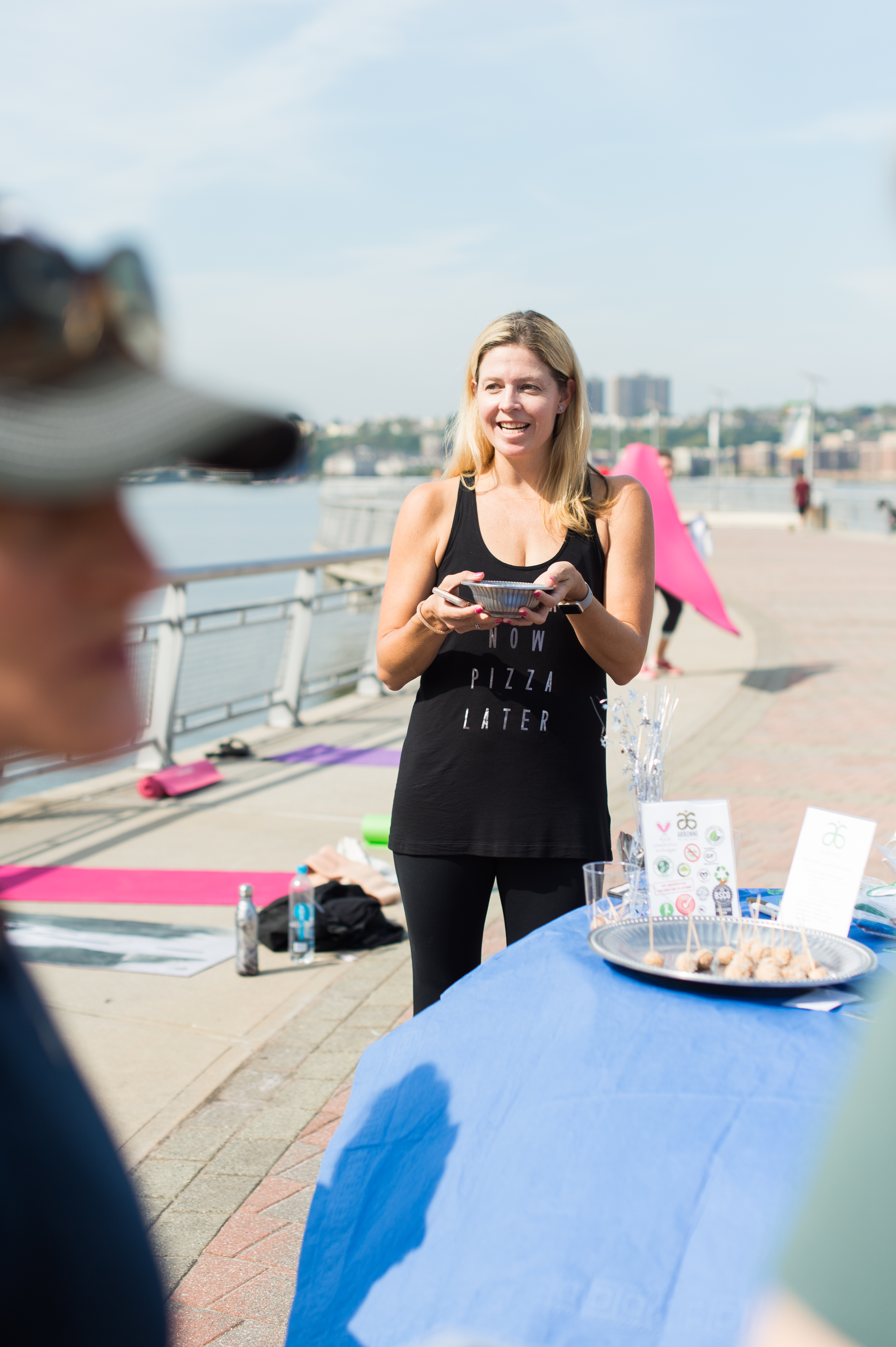 At the end of the event, a fitness-themed prizes from Gaiam and Arbonne were raffled off to grateful guests. All attendees who donated to the Give Back Yoga Foundation were given a raffle ticket.

Sweat for Smiles hopes that our attendees enjoyed taking Kristin McGee‘s invigorating yoga workout, indulging in the healthy Fit Bites on the Hudson, mingling with other fitness-minded guests, and learning a little more about Give Back Yoga Foundation, an incredible cause. In honor of our heroic veterans, when you are faced with an obstacle, remember to be brave, and never give up on what you believe in.

“The future doesn’t belong to the light-hearted. It belongs to the brave.” ~ Ronald Reagan

Thank you all for your time and support. Stay tuned for more details on Fit Bites recipes, our fave poses from Kristin McGee‘s Warriors for Warriors Yoga Workout, and the latest fitness styles from Gaiam, and more.

Until then, Sweat. Give. Sparkle!

Join us and sign up to receive our FIT It In email newsletter for the scoop on how to FIT fitness into your everyday life. Get the latest fitness trends, recipes, news, perks, and info on upcoming parties.